On April 18th 2016, Veritas released Feature Pack 4 for Backup Exec 15.
So, what’s new here and is it worth the effort to upgrade?

Support for New or Updated Platforms and Applications

First of all, FP4 brings support for new and updated versions of Windows, Linux and VMware operating systems and applications like Enterprise Vault, Microsoft Exchange, SQL and SharePoint. Please refer to the official release notes for Feature Pack 4.

But, even more important, it also brings a new functionality called Instant GRT or Quick Catalog. Why this feature has different names in marketing material and the GUI, I cannot explain; but this feature is what I want to explain today in more detail.

What is Instant GRT?

Instant GRT is a functionality that allows you to configure Backup Exec not to create “full” catalogs for a job, but rather to collect only the most necessary information from the backup set, a so-called “quick” catalog.

Note:
In this post, I’ll use the term “Instant GRT” to describe the new feature. Please note that the functionality in the jobs’ properties is called “Quick Catalog”, instead: 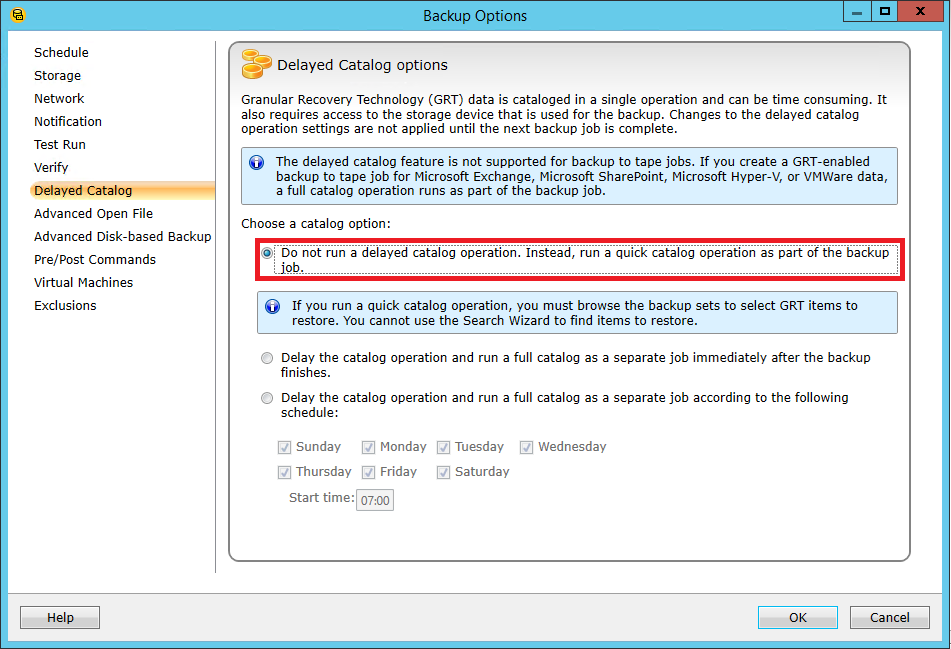 If you have ever monitored a backup job in Backup Exec, you’ll know that creating the catalog for a job takes quite some time. If GRT is enabled for the job, creating the catalog may take a significant amount of time. I’ve seen backup jobs for Microsoft Exchange, where the creation of the catalog took nearly as long, as the time it took to transfer the data.

The most important advantage Instant GRT brings is the significant performance improvement in the overall run time of a backup job.
As explained above, enabling Instant GRT in the properties of a backup policy instructs Backup Exec not to create full catalogs anymore. Instead, only the most necessary information about the content and location of the backup set is collected. Since this is done during the backup time of the job, you’ll no longer see the status “Cataloging…” for those jobs.
And, as I mentioned above, this may save you a huge amount of time every night, resulting in a far shorter backup window.
Keeping this in mind, one could rethink the idea of creating multiple jobs for a virtual environment in order to run GRT backups only for the machines where you need a single item restore. In the past (before FP4) my recommendation was to enable GRT only for file servers, domain controllers and servers running Microsoft Exchange or SharePoint. The idea was to save the time needed to create catalogs for systems where a single item restore was unlikely to be requested in order to minimize the backup window. But with the functionality of Instant GRT this is no longer necessary and you can run a GRT enabled job against all virtual machines.

Note:
But please do me a favor: read the rest of this blog, before reconfiguring your jobs.

As always, there’s also a second side of the coin.

You cannot search within backup sets that had the Instant GRT option enabled during backup time. The only way to find granular items to restore is by using the browse functionality.
And, since there is no full catalog of the backup set, browsing through the structure of an Instant GRT backup set may take slightly longer, compared to a set where a full catalog exists. In the test we performed during the beta phase of FP4, we saw a delay in opening a folder level in an Exchange backup between three and eight seconds compared to one to five seconds for backups with a full catalog.

During the engineering phase of FP4, I was asked several times, whether I’d think that this was more an inadequacy or rather a showstopper for the partners and customers we support.
My answer was always “Most admins never use the search functionality anyway and the opportunity to save up to 50% of the time it takes to run a GRT enabled backup job is much more important than the few moments it takes more to browse through an Instant GRT enabled backup. Especially when keeping in mind that less than 5% of all backups taken are ever used for restores.”

If you don’t agree with me here, please leave a comment here. I’m really interested to learn, what you use the search functionality in Backup Exec for.